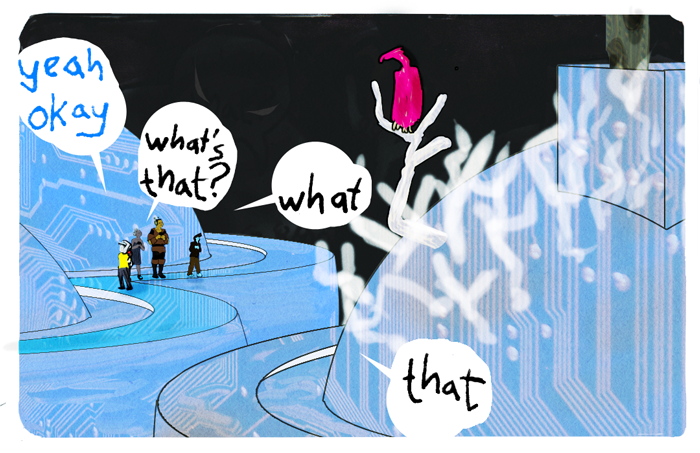 I’m very interested in the boundaries where fiction meets reality.

…and I don’t think it’s a coincidence that so many of my favorite movies have been described as “incredibly pretentious” that I actually search for that keyword, but I digress…

But the borders between real and imaginary are permeable, and I find that fascinating. One of the things I liked best about True Detective is the attention to the idea of shared hallucination and what profound fiction experiences mean in this world of CGI. There was lots and lots of CGI in True Detective, though few people noticed it, because it was mostly used for too-perfect reflections as they drove around in their greenscreen car. But that’s a large part of what the show was about — what consensual hallucination, catharsis, faith, and fiction mean in the modern day. The stories we tell ourselves are the masks we wear, and perhaps Rust wears no mask, but perhaps there is more to it than that. The vortex in Carcosa was not unique to Rust. He was not the first to see it, and if the story is to be believed he will not be the last. Even though it’s made out of bad meth and acid and human suffering and it doesn’t “exist” in any sense you can point to, a lot of people in the show saw it, so it’s sort of real. The audience can’t appreciate it, because we were expecting spectacle and what we got was birds flying in a spiral and a cool-looking karma tornado. In order to understand it we have to make that leap to the character’s minds, to see that to them it is real.

I’m interested in the way that, though Jack Kirby died in 1994, his characters live on so strongly that they suffered a collective nervous breakdown in 2007, provoked by George Bush and what he did to American identity. It happened during a Marvel crossover event called “The Civil War;” look it up. Practically no Kirby character survived that story without major changes and/or death. and then were reborn on the movie screen as the biggest franchise the world has ever seen, fresh and new and mysteriously more like themselves than ever. I’m interested in the way that his greatest enemy/collaborator, Stan Lee, has been mysteriously transformed by time into a living Kirby character who must do battle with Stan Lee Media Inc., a corporate entity that has divested itself of ol’ Stan and now battles him for copyrights, those worthless-but-incredibly-valuable paper leashes on characters that he never created but chose to claim.

101 Dalmatians is a hilarious romp, on the one hand. On the other, it’s a love letter to 1950s design aesthetics and one of the most beautiful animated films I’ve ever seen. It’s also partially responsible for people not wearing fur any more, because Cruella DeVille is one of the meanest bad guys ever and she’s running a puppy mill right there in a Disney movie; it’s pretty grim. I think it had an impact.

I think the Fisher King had an impact too. It humanized the homeless. Maybe that made a difference. One thing I know that it did for sure was immortalize a certain time period in New York City history. It’s a love letter, a document of the way it was at the end of the 80s, right before Giuliani choked it to death with dollar bills, and it is very accurate and very honest and very, very true. They bring to life the AIDS epidemic, the terrors of Central Park at night, the lost era when regular human beings still lived on Manhattan Island.