The Perils of Perry, Part One 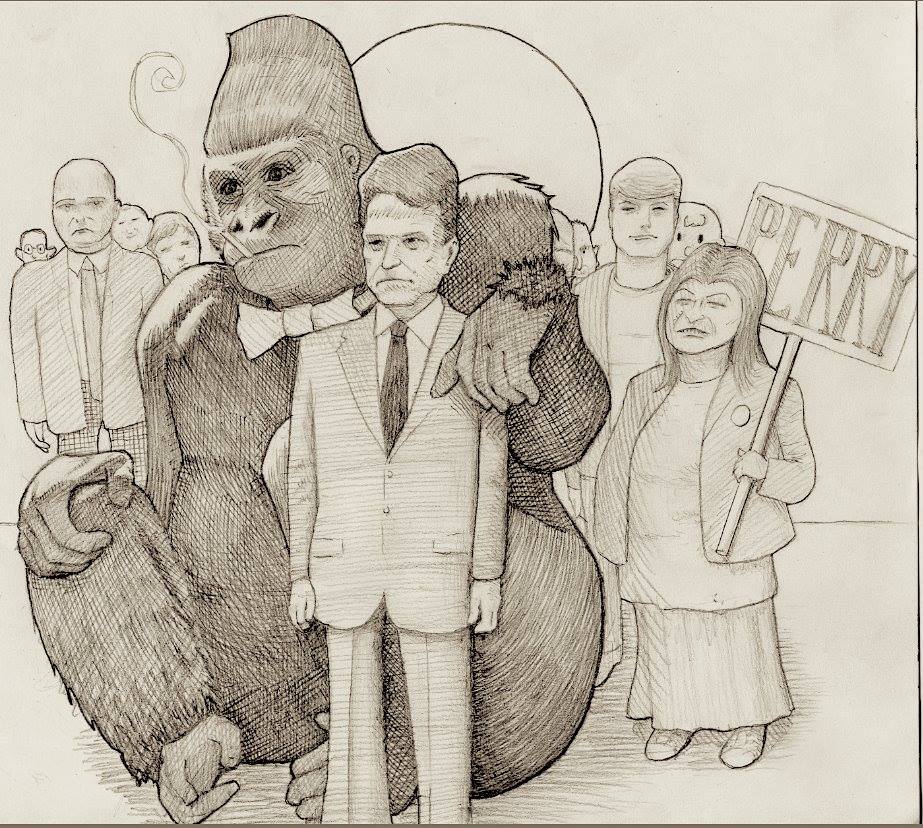 The Grim Gorilla Of Official Indictment, drawing by Carey Atchison.

I’m not a lawyer.

I’m also not a criminal, governor, or prosecutor. Just an interested observer who has been interested for a while now, so hopefully I can explain a few things in non-legalese. Right now, here is the situation as I understand it.

Pretty sure, yes. Dead, fucked, and burnt. But even better than that, he doesn’t seem to know that he’s fucked, or at least he doesn’t seem to quite believe it. That means good fun until he figures it out, and if he manages to win this thing it will be so amazing that even I might consider voting for him.

Why is Rick Perry fucked?

Because he publicly threatened an elected official and a governmental department. Then he carried out the threat. Then it came out that he probably sent some people over to threaten some more in private. And by the way the person was in charge of the department that was investigating him for corruption. And by the way there have been other similar cases where other DAs got caught for DUI and Perry didn’t say boo. And by the way this case is going to happen in Travis County, with a Travis County jury.

There’s no question that he broke the law. I’ll let some guy from Reddit explain it:

It’s not the veto that is in question, it’s linking that veto to something outside his official powers (determining whether a public official should resign or not).

Just like any quid pro quo bribery case. If a public official says “If you do X then I do Y” the Y will always be a legitimate power. That’s why he is able to run the scheme. In this case it was “If you don’t resign then I will veto your budget.”

But what about Lehmberg and her DUI? Isn’t Rick Perry standing up for the rule of law?

Alan Dershowitz said, “If you don’t like the way Rick Perry uses his office, don’t vote for him.” Sir, that’s the point. Lehmberg is an elected official. Perry may not like that she didn’t resign, but that means that Perry, a Travis County resident in at least some senses, should not vote for her.

There’s no law that an elected official has to stand aside in Texas if they are convicted of DUI. A lot of people thought there was, but they checked, and there isn’t. Makes sense, when you consider how drunk Texas politicians traditionally have been.

So maybe there should be, but you have to pass the law before, not after. So it isn’t the law that she had to step down, that’s one sure thing.

Lehmberg doesn’t work for Perry any more than she works for me. In fact, she works for both of us exactly the same amount, because we both are Travis County voters. She’s an elected official, a direct employee of the good people of Travis County, and it is up to all of us to hire or fire her.

There’s a lot more to the story of why Perry thought it was so important to get rid of Lehmberg, but let’s stick to what’s gonna give Perry trouble right now. Perry is going to do everything in his power to make this trial about Lehmberg, but that’s only going to work outside the courtroom. Inside the courtroom, she’s as relevant as the cashier at a convenience store that was robbed.

And Rick Perry’s right to veto her funding is as relevant as a police officer’s revolver, if that officer used that gun to rob a convenience store.

In the sense that the law is a collection of opinions, sure. But the thing about the law is that it doesn’t care if you don’t believe in it. The court does not actually care if you recognize their authority or agree with their decisions. They don’t care if you get distracted by Ferguson, Robin Williams, or Beyonce’s troubles with Jay-Z. They don’t need your attention or your permission. They have Perry by the shirttails, and they are set to drag him all the way in.

This doesn’t mean I like or approve of our criminal “justice” system, but it is always pleasant to watch the supervillain get fed into his own death machine.

Perry’s appeals to public opinion are spectacularly misguided, because these people don’t care. He can hyperventilate about liberal conspiracy all he wants to, but the actual Republicans that are processing this indictment are not going to be impressed that he is on Fox News calling them dupes. Look it up — Lehmberg et al. recused themselves from this case. There are no Democrats connected to the prosecution. The judge is a Perry appointee, the prosecutor is a solid Republican. And that’s a special prosecutor, they went out and got him special. Because they intend to nail Perry to the wall on this one. This is a hand-crafted artisan indictment that they have made for Ranger Rick, entirely out of local materials, and attention was paid to every detail.

Not that I mind Perry getting the best defense money can buy. Let him. Let’s make sure this lynching is legal.

Speculation: It is actually Republicans who are taking him to task right now. Because there really are smart Republicans out there, though they’ve been feeling lonely, and there seems to be a sentiment swelling among the more perceptive Reds that they have to take their party back from the yahoos post-haste. It’s too late, but you can’t blame them for not wanting to realize that. Anyway, the underrepresented Smart Republican movement has been itching to knock the fools out of their tent for a while, and I think that may be what’s happening here. There’s just no space, in this game, for mistakes of this magnitude. Perry’s own team will have to take him out just to stop him from scoring own goals.

The only Democrats that Perry will have to deal with…are the ones sitting on the Travis County jury that decides his case.

Good luck on that one, guv’ner. 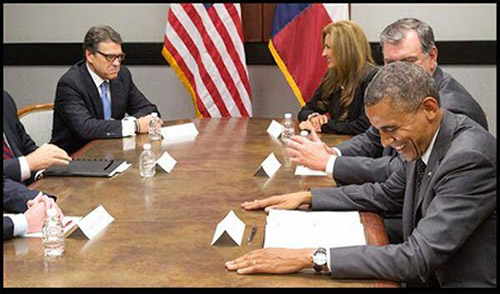 I was told there would be corn dogs.

Yes. Of course. This is about a politician attempting to force another politician to leave office. It’s all politics, all the way up and down. If you don’t like politics, this is not the legal case for you. Calling this politics is like calling it a court case involving bipeds that eat food. Pretending that you care about this case but you don’t care about politics is like proclaiming yourself vegetarian with a mouth full of McBurger. THIS IS A POLITICAL CASE.

What if this is some amazing ploy by Perry to draw the Democrats out so he can destroy it?

If that were true, I would seriously consider voting for Perry. Anybody who can play chess that many moves ahead is bound to be right about some other things too.

But it’s not true.

My question, for some time, has been, “Is Rick Perry incredibly smart or incredibly dumb?” Because you just couldn’t tell. He would do astoundingly stupid things (like praying for rain), then astoundingly canny things (like the school book controversy), then stupid things in really, really smart ways (like when he shot the coyote), and you just couldn’t tell. Well, the needle just got buried in “Stupid.” Whatever the deal is with those glasses, they aren’t making him smarter.

It’s very hard to believe that this is some sort of hyperclever ploy by Ranger Rick to draw Rosemary Lehmberg and her backers out so that he can destroy them and the Public Integrity Unit. I say that as a person who considers all sorts of things plausible, but that one’s hard to buy. Because if he was really after the PIU, he could have just vetoed their funding and not said one word. Or he could have made up some transparent lie — that’s what you’re supposed to do. Everybody would know it was over Lehmberg’s DUI, everybody who was paying attention would know that it was because the investigations were getting too close, but they couldn’t prove it, and that would be that. In June of 2013, before Perry opened his mouth, the odds of him taking out the PIU were good.

Now the odds of him getting the PIU are a little better, because he has his entire trial to dump every bit of dirt he has on them, and there’s a lot. There’s a lot of story here, a lot more than I can fit into this article. What you’re seeing with the PIU may be the very last remnant of the once mighty Johnson Machine, and their hands are stained with any number of sins and bodily fluids. So let’s say Perry was doing all this to raise his odds of getting the PIU from “good” to “very good.”

But the odds of getting Perry have gone from “barely any” to “pretty good.” He wasn’t under indictment before this. He was only six months from retirement!

Nobody made him walk into this shovel. This is 100% borrowed trouble. When all this is over, the investigations and indictments lurking for the really bad stuff he did are still there, waiting for him.

So will Rick Perry go to jail?

Never. Although the trial will be held in Travis County, and he will probably be found guilty, he’ll appeal. And he’s the one that appointed the people on the appeals court. It’ll end there.

But his career will have already ended. It has already ended as you read this, though the leg may still be twitching if you read it soon.

If we’re lucky, Perry will angry enough to spill the beans about Lehmberg and her managers.

And if we’re really lucky, that’ll make ’em mad enough to come back with what they know about Perry.

And then, if there’s a miracle, it won’t cause the government of Texas to collapse.

Thanks for reading. Tl;dr Rick Perry is in a lot of trouble for real and talking about Rosemary Lehmberg won’t help him. If you like the idea of Rick Perry being in trouble, you can help by refusing distraction.

It’s not about Lehmberg, it’s about the threat.

It is my fondest hope that this article will be read by enough people that an actual lawyer will show up and tell me what I did wrong. I’ll update if that happens.

Finally, here’s the rough of a piece I’m working on for the next issue of Rocksalt. It’s Rick Perry, standing on top of the Capitol trying desperately to keep back the ghosts of all the prisoners he has executed. Hope you like it. 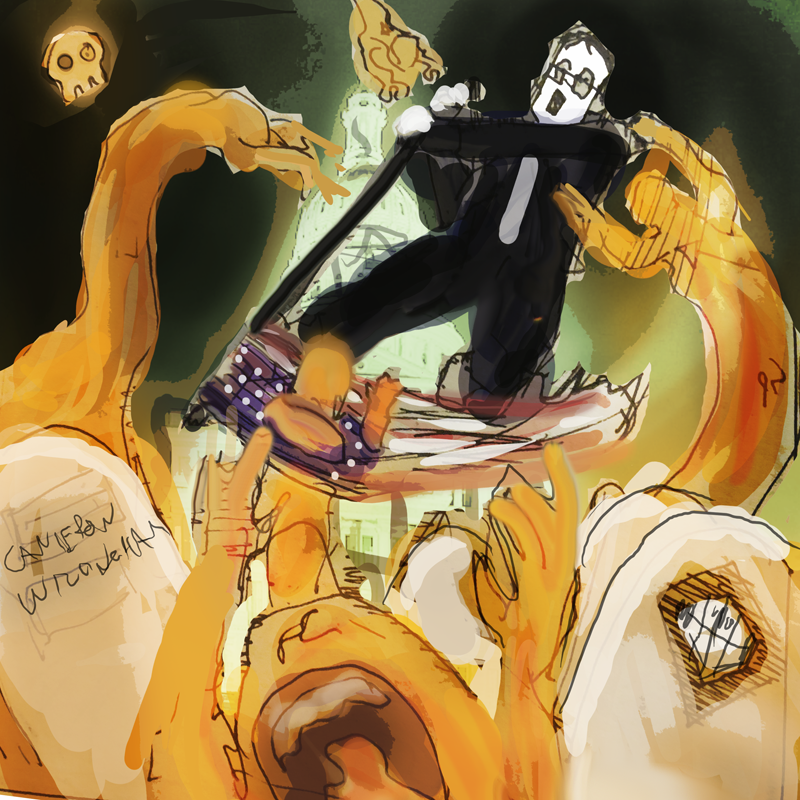 Perry versus the Ghost of Cameron Todd Willingham

Gewel and I plan to collaborate on the finished piece, I’d like to get it somewhere between the styles of Bernie Wrightson and Scooby Doo.