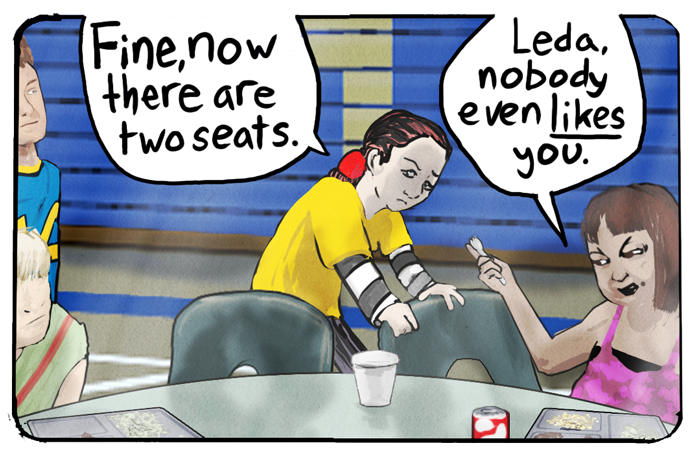 “If you can convince the lowest white man that he’s better than the best colored man, he won’t notice you’re picking his pocket. Hell, give him somebody to look down on, and he’ll even empty his pockets for you.”
–Lyndon Johnson

There is a weird and unfortunate trend at the Rainbow Gathering where a bunch of dumb young white homeless kids, who feel that they’re not getting enough attention from the old homeless people and the hippies, named their camp the “Project N****s.”

Because these kids were from the Projects, and we could never possibly understand what they’re going through.

They’re right, of course. Old hippies and old homeless are far too comfortable to understand what those kids are going through. These kids are third world poor in a first world country. They’re dying of easily preventable diseases that you’d think belonged to two centuries ago, they’re losing limbs to gangrene and walking around with sixteen teeth gone by age 25. These are the people who break bones, can’t begin to afford a doctor, so they set the breaks themselves, with duct tape and cardboard. I’ve personally seen this happen. These kids are as poor as it gets.

I should make it clear that we’re talking about thousands and thousands of people here, this is not just a small group I’m describing. Rainbow Gatherings are not small and they are not short.

But one bunch of these kids, they call themselves the Project N****s, and they walk around shouting it, and they actually literally get in fights over whether they have a right to call themselves n****s or not, because it’s self-evidently obvious that they are as poor as any human being can be. In their opinion, they’re as low as anyone alive so why can’t they call themselves anything they want?

The weird thing is that they really don’t mean anything racist by it. They’re just trying to shock the “elders” into paying attention to them.

In the process, though, they scared all the black people out of the Gathering.

Because black people do not have a serious camping culture in America, and Rainbow is more-or-less coalesced around Boy Scouts culture and national parks, there have never been a lot of black people at the Gathering. That had been slowly changing, as our reputation for being an intelligent and accepting group grows. Over the last ten years I’d seen a lot more people of color at the Gathering, whatever color, whatever culture.

But now we have a gang of street kids roaming the woods at night literally screaming “N****!” People who are just coming to the Gathering for the first time have no way of knowing that they’re shouting that ironically. It is frankly going to scare the shit out of people, because camping is scary at the best of times, and conjuring up fucked up old demons is not going to invite anyone to huddle under a tarp in the rain with you for a month.

These kids didn’t think of that. Is it because they don’t know any black people? They’re homeless as hell, you got to figure they know anybody else who’s poor.

Or are they right? Are we letting ourselves be upset by a mere word? In the jargon of the group, why are we allowing a word to have power over our feelings?

Does their poverty give them the right to repurpose an epithet? Here we are, in a society that has done nothing for them. These are the kids who slipped through the cracks, the orphans that ran away and no one ever tried to bring them back, the ones behind the dumpsters who look twenty years older than they are. Society won’t even spare them a band-aid, why should they care one way or another? Sure, Rainbow gives them food, but we could give more, and we don’t, and they know it. We’re not just hypocrites, we’re hypocrites who are willing to hang out with them, so we hear all about it.

So I went back and forth about it until I realised that they’re yelling “Nigger” to impress me, who is white. I’m who they’re trying to get a rise out of. They’re trying to impress me and all the other hippies-who-live-in-houses, who, by and large, are either Caucasian or Native American or some combination of the two.

So they were just yelling nigger to impress white people. They didn’t really care whether or not any black people heard them; those people weren’t relevant. They had found a word that tweaked white liberal guilt and they were going to use it.

I think it was then that I realized even homeless people have white privilege, and this intersectionality thing began to make a lot of sense to me.

I’ve always heard it said that the rich white of the South oppressed the black so the poor white wouldn’t notice how bad they were getting it. There’s something to that.