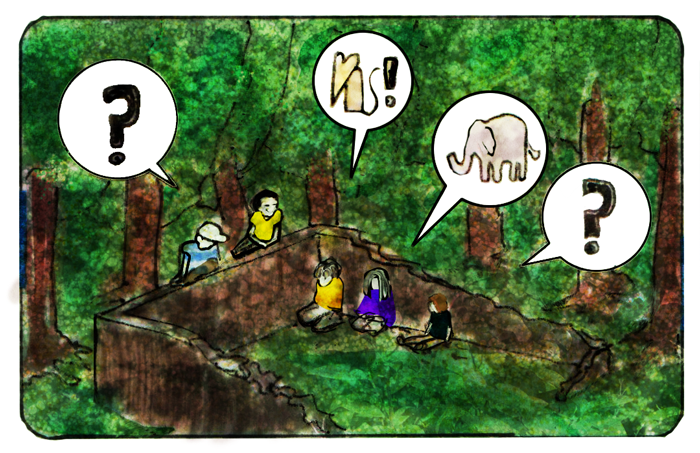 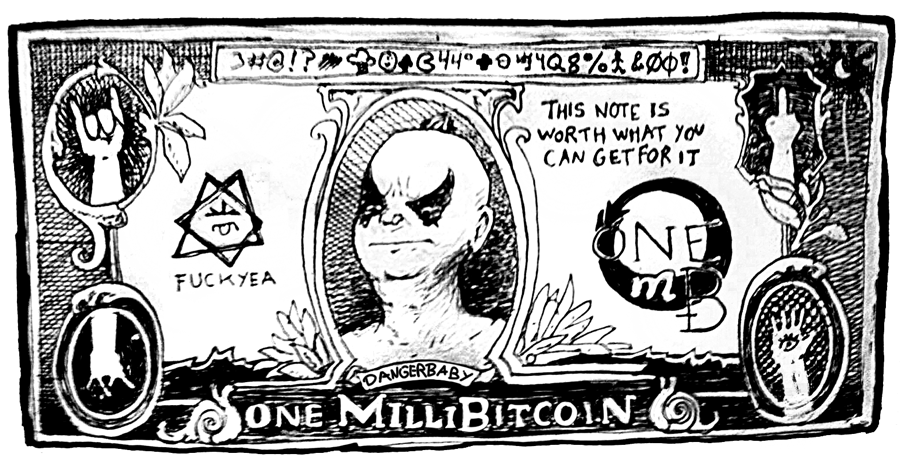 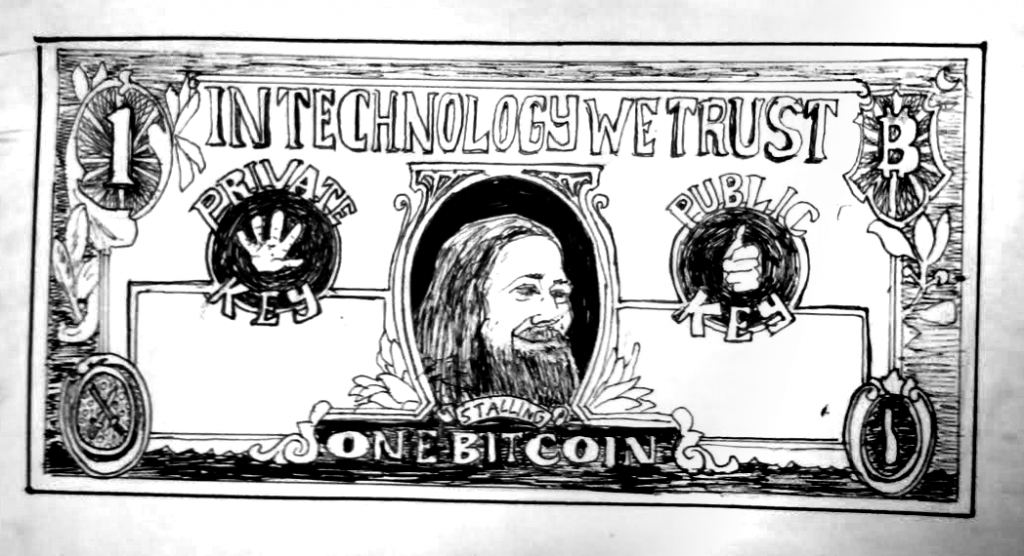 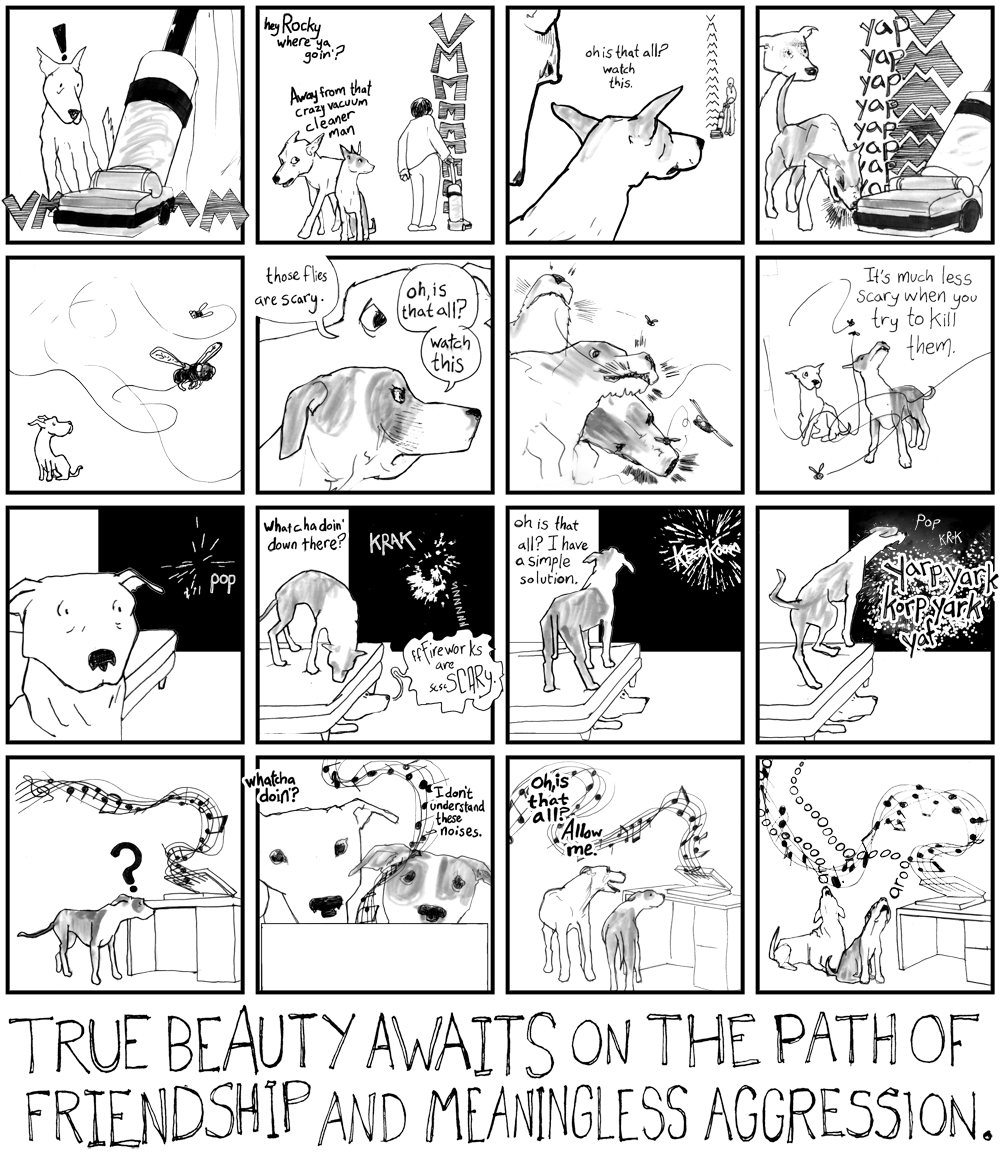 This is a cartoon that I’m doing for the next issue of Rocksalt.  It’s in response to somebody else’s cartoon, but it mostly makes sense on its own.

A word about method; since my computer broke, I’ve been mostly drawing with uniball on vellum.  I can’t live without layers, kids.  There is something I truly love about the crisp surface of vellum, the way you’re almost cutting into it with the pen.  I’m not one of those “pen barely touching the paper” types.  I bearing down on the page like I’m incising hieroglyphs.  My relationship with art is not easy, but it is fruitful.

So, for the first time ever, Rocksalt is running a budget surplus!  The Kickstarter still has a week to go (and we’re definitely gonna make it), but it’s already past the cost of the next issue.  That happened, and then one of the ads that I sold four months ago continues to pay off (that’s the nice thing about ads, once you sell them they tend to stay sold), so that’s it, we have about $100 into the cost of the next issue right now.  Pretty cool!  I’ve never had a profitable magazine before, I think I like it.  Between the Kickstarter for this issue and the ads for this issue and the ads for next issue we should have the magazine fully funded through the rest of 2013.  Once that is accomplished we can get started on upping the production schedule.

Almost there!  Only three little orders of magnitude left to go.  So donate to the Kickstarter if you can and share the link if you’re not in the mood to pay for things today. 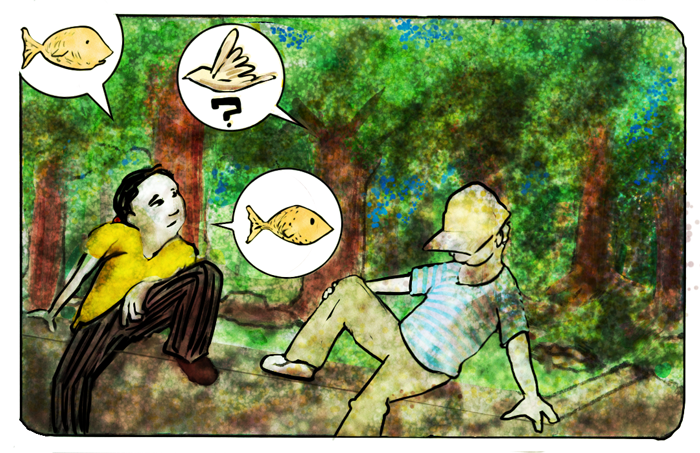 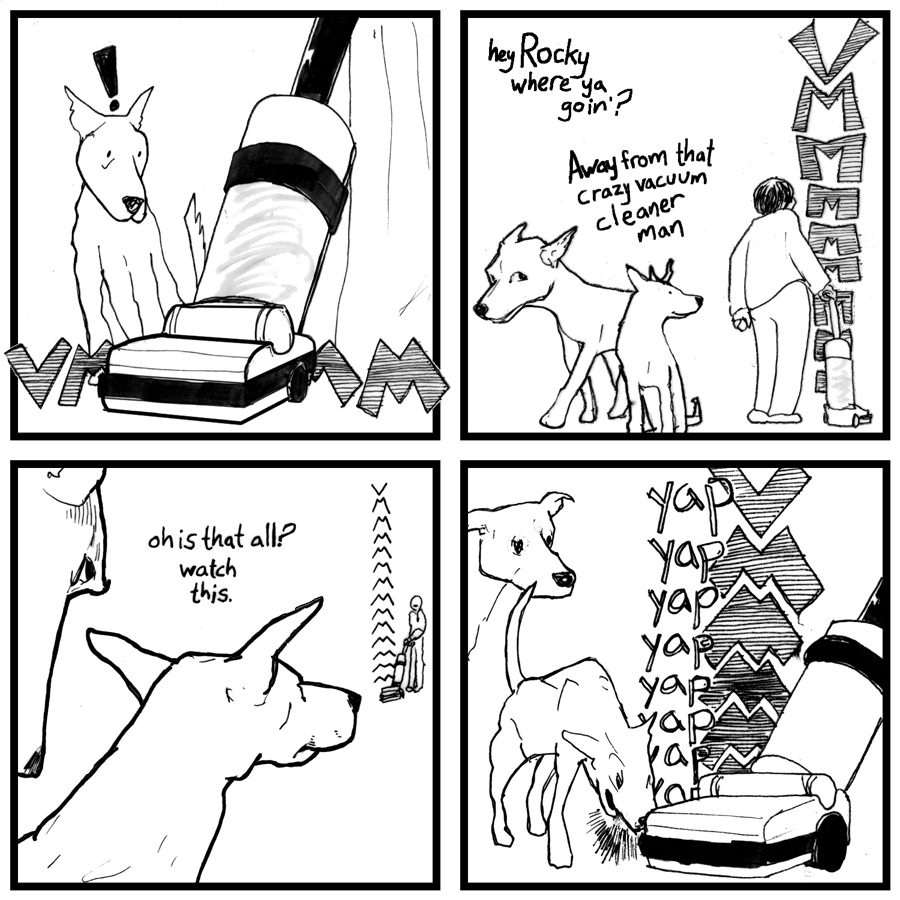 This is the first tier of a comic in the next issue of Rocksalt.  It’s gonna be a whole page eventually, check in here in a couple days to get the complete story of my dogs and how they deal with terror.

The next issue is coming out in just a few weeks.  Please consider going to our Kickstarter: 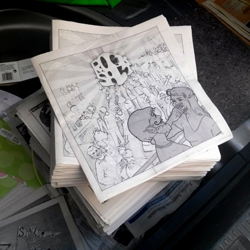 Rocksalt in the wild.

and supporting the project!  Thanks, sincerely; we know people need good comics, and we can use your help to get them to ’em. 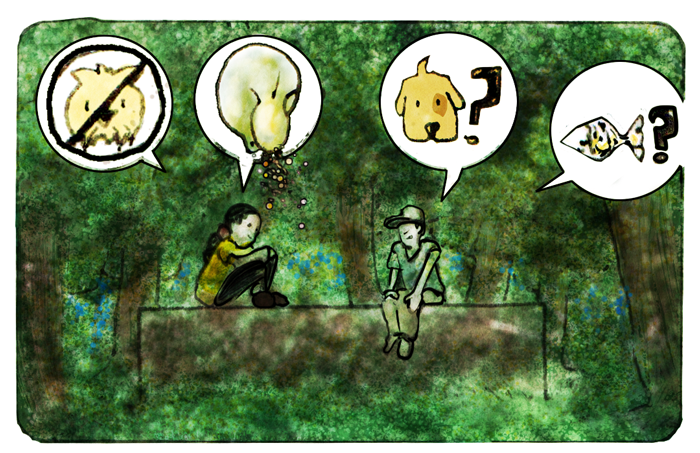 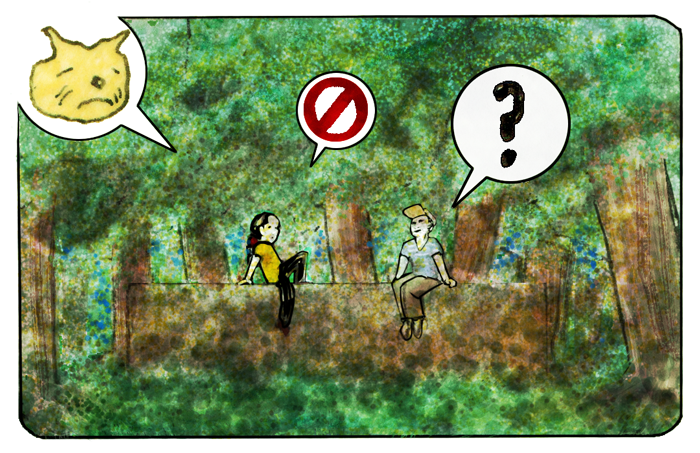 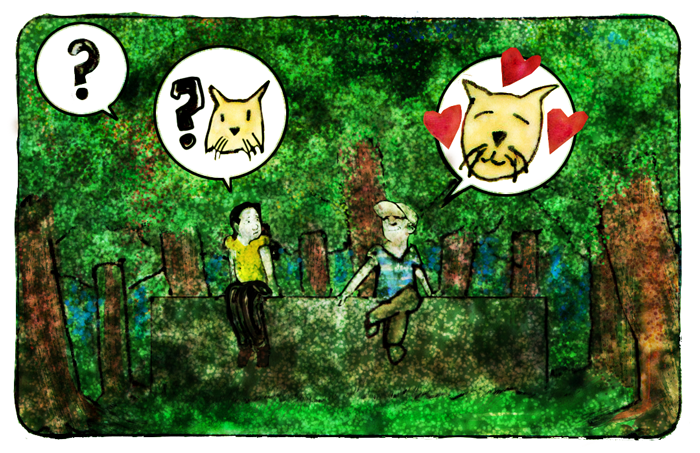 The Republican brand is fatally damaged. I don’t mean this in a political way, but in a societal way.

Certain overwhelming tropes and cliches of the Internet have become enshrined, and will be with us far longer than any of us expect. No one can be sure exactly which ones, because we are still in the moment, but it is assured that certain of our jokes, cliches, and forms of communication will persist for millenia.

For example, LOLcats, picture memes, Impact font, repeating gifs, FAQs, and many other tropes of our day will persist.

What does this have to do with the Republican party?

During this “Garden of Eden” period of the internet, current prejudices were writ large and enshrined. The Nazis, for example, will be bad guys forever now.

People will still know who the Nazis were a thousand years from now, and that is not because they were a type of evil never seen before or again, but because our culture enshrined them as bad guys. Our cultural prejudices, which at the moment of the invention of the internet held the Nazis as the biggest bad guys instead of the Huns or the Jacobins, have elevated the evil of the Nazis to literal legendary status.

The neocon Republicans were nowhere near as bad as the Nazis. However, they happened to be the biggest hypocritical jerks in the world at the moment that the internet was invented. The internet came to life around the mendacity of George Bush and its crew. A large part of our earliest dialogue came from complaining about, plotting to stop, and actively resisting George Bush.

You can see this now, when conservatives have adopted so many liberal protest strategies. Even the NRA is using the language of the civil rights movement. The language of modern debate was literally invented to talk about what jerks the Republicans are.

To make things worse for them, this is a global problem. The internet marked the moment that we moved from national culture to international culture. To make a simple analogy, the internet gave the Muslim world a voice at the exact same moment Bush and company was invading them. It also made it clear to the entire world that America did not agree with or in any way support Bush. This reciprocal knowledge fed the fires of antirepublican culture, and so many incredibly creative and long-lasting cultural institutions came out of making fun of Republicans that I have difficulty naming them all. I will point out the Colbert Show as one proof that parody and satire metastasized into something new and powerful as a response to the Republicans.

Because they were the biggest annoyances at the wrong moment, the Republican brand is forever fatally damaged. Internet culture is against them in general and in specific. The youth of America want nothing to do with them, and the entire world considers them villains and murderers.

The remaining Republican party is made up of people who are too dumb to notice this. The Republican leadership is selected from an ever-thinning strata of individuals intelligent enough to lead but not smart enough to see what has happened. The 2012 Republican nomination process demonstrates amply that the average quality of Republican candidates has dropped sharply and shows no sign of reviving.

Nothing anyone can do can possibly turn this around. It is as if it were writ in stone. There will be no miraculous resurgence like the Democrats after the Civil War. It is not politics that have turned against the Republicans, it is language and culture itself.

Honestly, I’m thrilled. The Republicans deserve to be disbanded for their crimes against Iraq, Afghanistan, and America. This total repudiation of Republicanism delights me. It delights me to watch rich fools like Rince Priebus go down with the ship. It couldn’t happen to a more perfect bunch. 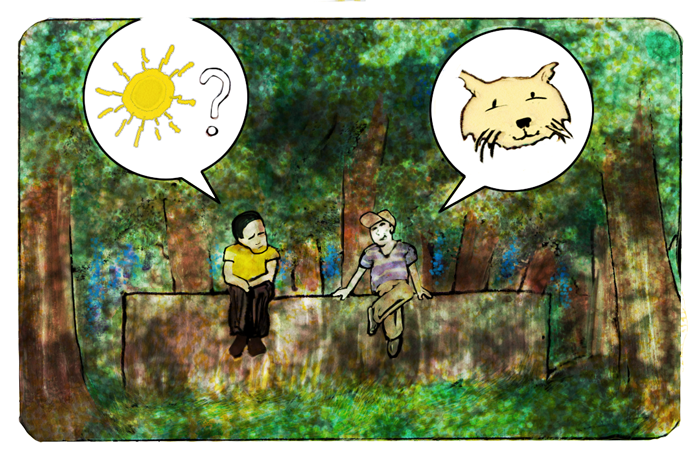 This Texas abortion thing is not even the reason.  My outrage-o-meter buried the needle when Perry tried to push that cervical cancer vaccine on every girl in the state and when they asked him why he said because they paid him to.  I just couldn’t be that upset about this issue ever again.  Texas has a government that preys on women.  Not news.

Speaking of not news, it turns out that Perry’s sister stands to make a lot of money off this new “ambulatory surgical center” thing they built into the law.  Surprise.

Abortion is the perfect thing to regulate.  The demand can’t shrink, no matter how illegal you make it, so all you can do is drive the price up.  There ya go; buy an abortion clinic, and then change the law so that only your abortion clinic is legal.  Bam, huge profits.

This is a reprint of a memo that is being circulated around the Capitol right now:

“After thoughtful consideration of Senate member preferences, and in consultation with the House leadership on their likely schedule, the Lieutenant Governor has asked me to distribute the following schedule update:

The House has announced they will consider a transportation proposal on Monday, July 15. The Senate will likely recess after completion of HB2 until Monday in anticipation of further actions being necessary to complete work on the Second Called Session. Please keep schedules flexible for next week as it is difficult to have a more precise timeline until more information is available.

Please feel free to contact me or the Lieutenant Governor’s Office with any questions about the floor schedule.”

This information is reliable.  Let’s just say I found it written on a piece of paper wrapped around three cigars.