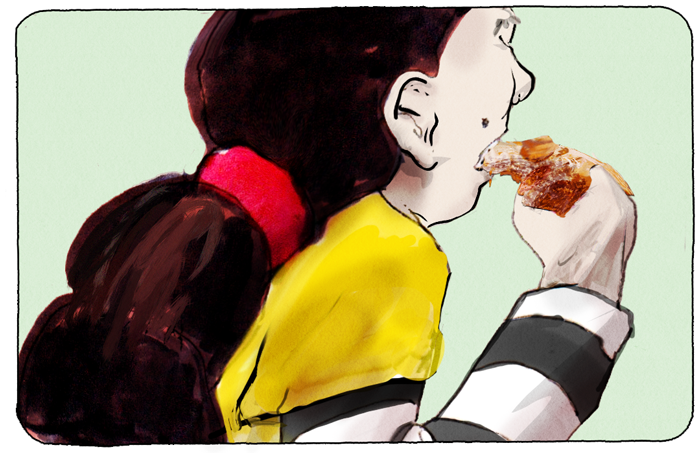 At some point Cloudhopper became extremely difficult to draw. I fell prey to the same problem that happened with megaTexas — kept setting the bar higher and higher for the art until one day the average page took a month. In a 400 page book that’s a problem — even if you figure about half is finished that’s seventeen years until it’s done. I want it done in three! One year per book, and I’m already done with the first third of book three.

The problem, as I see it, was rendering project creep caused by the circumstances of my life. Cloudhopper began in San Diego, where I was about as lonely as I’ve ever been since my very early days in New Jersey — I made real friends in San Diego, and I truly love the people I lived with, but for the most part I was tooling around that town alone, going swimming alone, sitting in a coffee shop all day drawing and sitting in my garage apartment all night drinking energy drinks and drawing. I think the early pages of Cloudhopper reflect that, because I was in a hypercaffinated rage tearing off a page a day, and you read it now and you’re struck by the fact that not much happens. It happens in a cool and visually interesting way, but it’s about a guy looking at a cloud. Really looking at a cloud. Looking as hard as if his life depended on it. 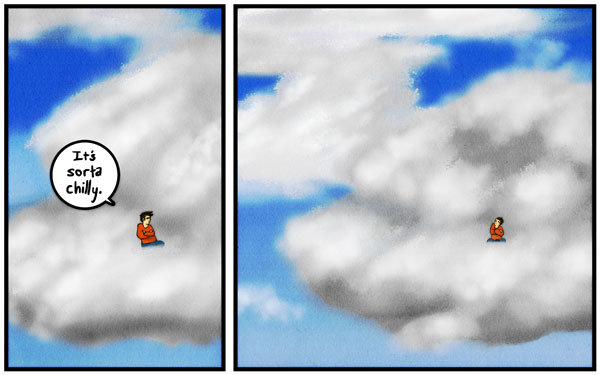 Book two began in San Diego, and that’s where the project creep began. I was doing a page a day and I started slowing down and getting really involved in some pages. This was the first of the one-month pages: 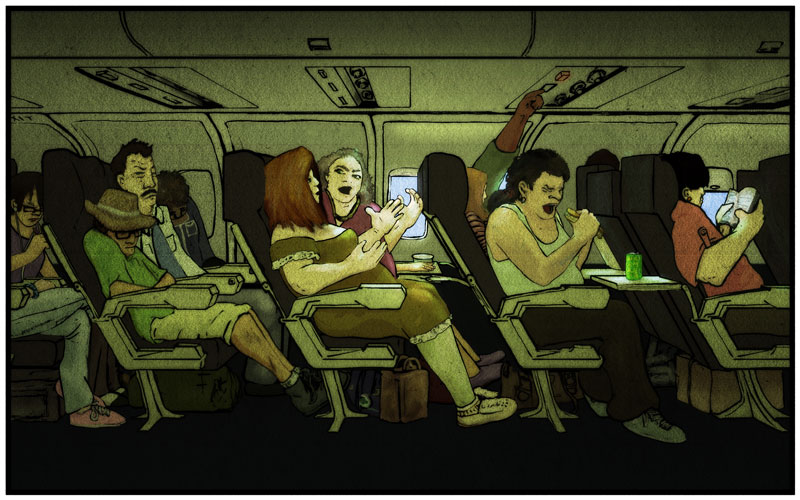 Far from the last though! But it was here the pattern was established, and looking at it now I see my doom in this moment. Because now the art styles didn’t match. It was very easy to see which pages took a month and which took a day.

But I didn’t know this at the time, and I was unaware of just how much my figure drawing was going to improve in the five years to come. Yes, at this point it was only 2009.

Then I moved back to Austin, and kept putting the same amount of time into each page. Why not? I wasn’t dating anybody, wasn’t really doing anything but partying and swimming and drawing. I started to get precious about lighting and more interested in proper backgrounds at the time.

So each page was taking a week or two, but they looked pretty good. Figure drawing’s still a bit wonky and the background isn’t that great, but it’s starting to get interesting. At the time I thought it was pretty okay, now I see it as what came immediately before what came in late 2010. I was also doing a lot of redrawing of early pages by now.

Then I went to Europe, and this was my undoing. Suddenly I was surrounded by actually fascinating architecture, and I wanted to translate it into Cloudhopper. Since I literally wasn’t doing anything in Europe at all except for walking around and looking at things, I could put twenty hours of work into a page in the average two day period. Plus practically nobody had wireless, so I had no distractions. I would spend nearly every other day sitting in a cafe or a hostel drawing like crazy. I was in Europe nearly three months and may seriously have spent 800 hours drawing. 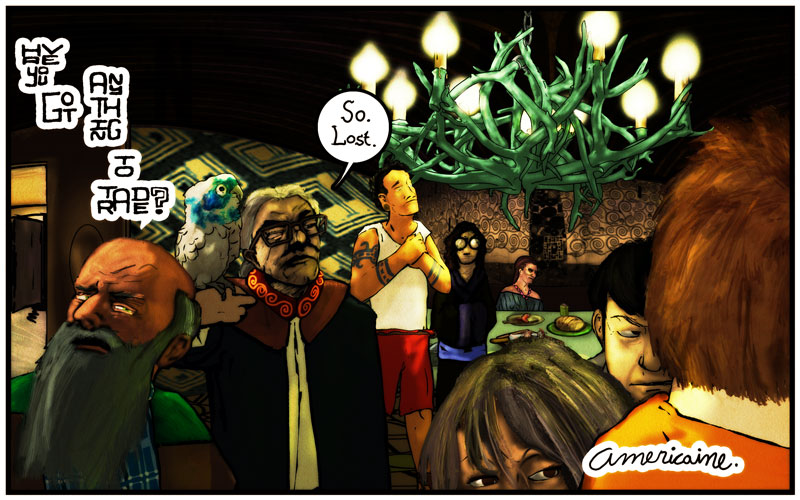 The lighting and characters are worked out to just a ludicrous and silly degree, I mean it’s a little crazy. The light in this scene is literally built up on nine different layers, each one of which represents the light from one candle in the chandelier. There is no point to working like that, I did it to satisfy my own mathematical curiosity and I didn’t do a very good job, but it was an interesting day that I spent, sitting in a hostel in France drawing those candles. A whole day. I made myself stop.

So now I’ve got the comic set to where I’m supposed to draw it ten hours a day every single day for months at a time.

And then I go home, get married, and have a kid. I also started Feef, which used to have a really long lead time until I lost my computer for six months. Cloudhopper has become my first alternate project, when I have a spare second I work on it. That means that a page that used to take three days now takes two weeks to a month. I don’t even know how long the pages that used to take a month will take now; probably years.

With Feef I’ve done a reasonably good job of keeping the art style consistent but I can already see myself getting precious and overcorrecting. Possibly because I’ve started to do some oil painting, but I’m getting much less interested in the multilayer extravaganzas that I used to do. I’m a lot more brave about working on the same layer and picking my own colors instead of trying to do some sort of synthetic system like I was before. I think my comics are getting somewhat more realistic and visually well constructed, which I guess makes sense if I really did plug in that sort of time.

Nevertheless, let this be a lesson to me. Keep the art style consistent or you won’t be able to finish the comic. I’ve had Cloudhopper written for five years now. It’s time to get it done so I can move on to other projects. Unfortunately that’s almost three years away.

Longer if I keep writing instead of drawing.