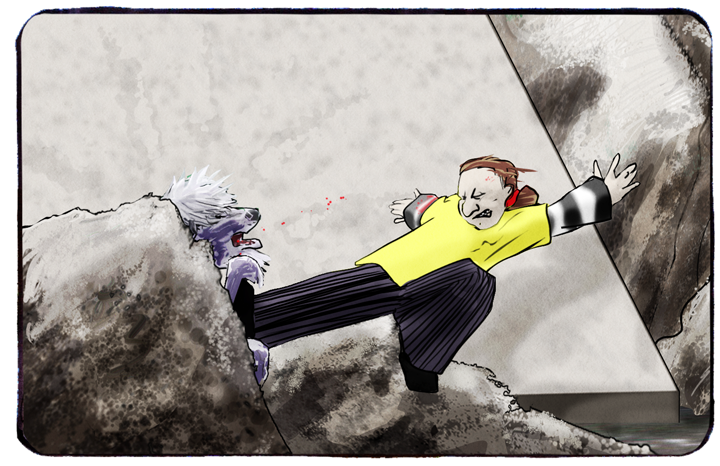 For the last month I’ve been working on a comic assignment I like at a rate of pay that I find acceptable. We’ll see how the next six months go, but all I have to do is turn out a good comic on a decent schedule and I’ll be doing alright.

The negative feelings that come with the prospect of career success and financial compensation are astounding. All I have to do is touch the pencil to the paper and I’m overwhelmed with feelings of regret and self-doubt. Do comics matter? Who am I, an adult, to risk my child’s future on this financial foundation? What if I make a really good comic and it just fails at a slightly higher level than the one I’m used to?

Doesn’t matter. I’ve been making comics for a while now, and I know how to make a good comic. These guys paid me for it, and I like the script, and they’re letting me do it right, so they’re gonna get a good comic. Maybe after this one there will be another one.

A really good friend of mine died ten years ago, around about today or so, and I think about her often, about the accidents of fate that allowed me to keep going when she had to stay in the past. It would be nice to do things in a way that, I dunno, carried on her dream. Is that too much to ask?

Why is it important to turn life into comic books? Because maybe if the problem with us is in our heads, maybe we can think our way out of it. Comic books catch people when they’re young, when their guard is down, when they’re ready to see things another way. It’s not as good as going to Africa and building schools. That’s what my friend did. But ya gotta have the books to put in those schools, right?

Meanwhile, Tex is growing up great and I get paid to sit here with my drawing board and watch her go humming around the house, bumbling around and getting taller. Gewel’s mother is coming to stay with us for a while, maybe a long while, and my happy little kid is going to get to know her grandma. Life’s going on. I got to stay with the part of life that went on, and it’s grand.

A lot can happen while you’re staring at a piece of paper.