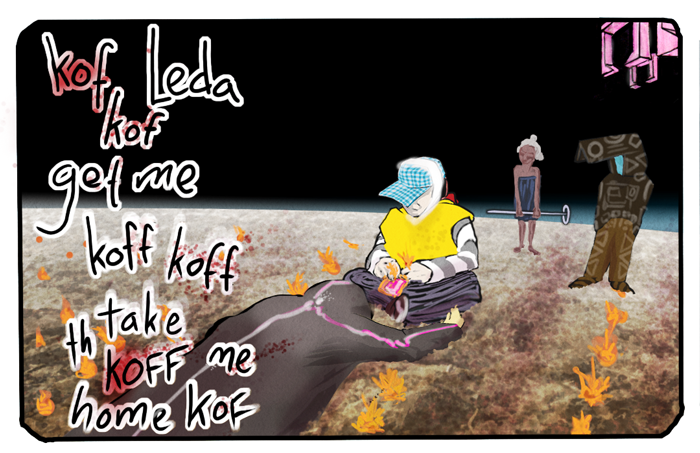 Lately I’ve been musing on the importance of anger in literature. It began when I read a curiously soulless piece of comics called Scarlet, which is a Bendis/Maleev attempt to get Big Readership by doing a comic about Big Ideas. It’s made by two consumate professionals who are trying hard, but for some reason it felt as slick and cold as a refrigerator door.

I was also thinking of something Gewel said about a story I wrote, that the problem with the story was that the main character never got angry about how they were being treated, they were just bemused.

Gewel feels that anger is an “umbrella emotion,” which I guess means that it is a complex emotional response that’s connected to many other responses, concealing and protecting them.

Anger is important in fictional characters. It reassures us that they are reacting to their environment, to the terrible things that are happening to them. It leads us to infer at the vast continents of emotion that must surely lie behind their titanic ires and piques. Characters that don’t get angry, we assume, must not have anything very important happening to them. They are sleepwalking through the machinations of the plot.

Characters that calmly and cleverly monologue about how angry they should be are just the worst.

I’ve never been a big fan of characters who were too cool to act like their stories were real. Meta characters annoy me terribly, it’s like having a good story read to you by Norm MacDonald. Yeah, maybe stories are stupid, but that’s up to me to decide for myself. I know one way to make sure stories are stupid, and that’s to have some sarcastic ass like Norm MacDonald read them to you in the snidest sneer.

Now, anger isn’t snide. Anger is a honest reaction from a character who, essentially, lives in a world with an evil god sadistically planning to tear their lives apart for fun and perhaps, if you’re lucky, the dubious illustration of some obscure moral purpose. If a character is not angry at what is happening to them then, in some way, the story isn’t real.

The fact that it’s all a story should not be a comfort to the characters in the story, any more than it would be a comfort to you to find out that your life was being directed by omnipotent but bored artists. What if you found out that the worst tragedy in your life, up to and including your death, was staged to entertain somebody? That’s how your fictional characters should feel about being fictional, so unless you want to stop the story to talk about that for a long time then it’s best not to raise the issue. Slick meta-commentary raises the issue quite accidentally, but then asks us all to ignore the elephant in the room. “None of this is real,” they say, as they go through the paces of action movies with blank faces.

I have a friend who is angry right now because he thinks somebody stole some things from him. His place is such a mess that it’s impossible for anyone besides him to be sure; all these things that are missing could very easily be in the piles of junk, they might well have disappeared years ago and he only noticed now. But his anger, his hurt are very real. He’s losing sleep. He’s randomly suspecting people in Wal-Mart of being one of the thieves.

He’d be happier if he thought that it wasn’t real. He’d be healthier.

But then it wouldn’t be as good of a story.

Fictional characters get a raw deal. They should be angry.