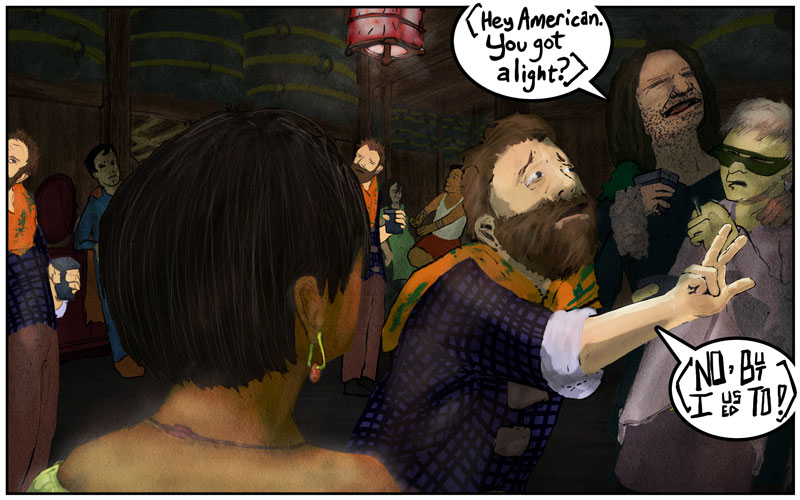 Cloudhopper #223 (and by the way I renumbered a bit, so you didn’t miss one)

Hey what do you know, I finished a page of Cloudhopper!

See, here’s what happened. Three or four people came up at Wizard World and expressed a wide range of disappointment that it had been two years and Book Three was not done. So I got to feelin’ guilty.

After getting back into Cloudhopper a bit, I’ve found it’s become somewhat easier. My photoshop method was unnecessarily precious and overly complex (nothing compared to how bizarre my method for Feef was, but I digress). My insistence on putting everything in its own layers was leading to overall disunity of form and storytelling (a fault that may be on display in this page, because I don’t know how obvious it is that this page takes place over time as Dan wanders awkwardly through the crowd).

Anyway, new page! Tell me what ya think.

It’s time to finish Cloudhopper. I started it with the Obama presidency and I’d really like it to be done before he is. It’s taken me five years to produce half of a 400 page graphic novel. That’s…not that great. Plus, if I was done with it, I could work on other things. A story about cavemen I wrote is calling my name, and War on Christmas (Gewel’s and my project) keeps calling my name.

Right now my major projects are finishing Cloudhopper 3 and the Twin Peaks comic, hopefully both by Staple. It would be awesome to have two projects for Staple. It’s not completely impossible, because the event is three months away and I have 48 pages to finish of Cloudhopper. So if I do one every other day I’ll get done in time. Twin Peaks 2014, on the other hand, has 20 pages to draw. So if I….get that done too…at the same time…while raising a child and working….and keep up with Feef and SWE…

I WILL BE AWESOME!