So I was doing a comic book about Twin Peaks, where Dale gets out of the Black Lodge after 25 years and tries to pick up his life again.

I’d put in about sixty hours, worked on it for two 24-hour-comics-days and a couple other serious work sessions and it was going really, really well. My wife did an amazing cover for it, and I had 18 of 32 of pages completely done. Then I heard that David Lynch was coming out of retirement to do more Twin Peaks. No problem, I thought, he’s probably just exploring the option and he won’t actually get around to it.

Nope; he’s getting around to it. He has casting calls for actors out right now and he’s definitely going to continue the story.

This leaves me completely lost. I don’t have any rights or relationship to the story at all, I just like it. This has transformed my comic from an amusing revivification of an obsolete canon to a demonically stupid attempt to cash in by competing directly with one of my favorite creators. I would have to be crazy and dumb to try to make this comic now, because I can’t sell it and nobody’s going to want to read it. Why would they? It’s exactly like if somebody wrote Star Wars fanfic in 1979 where Luke and Leia hooked up. What are you going to do with it after Return of the Jedi comes out?*

No way. Project’s over, I’m not finishing it. So, without further ado, I present to you the more-or-less finished first several pages of my Twin Peaks comic. 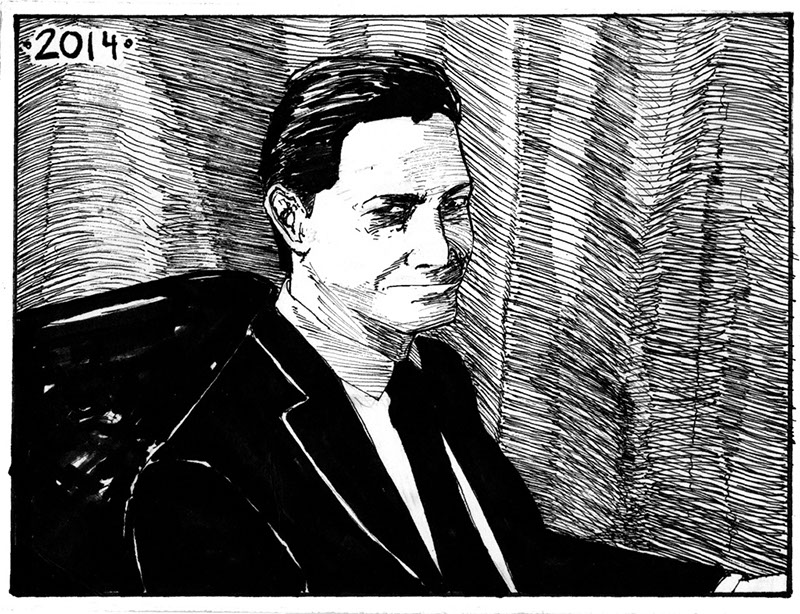 I consider this panel entirely finished. Every single panel in the finished work would have looked this good, I swear. 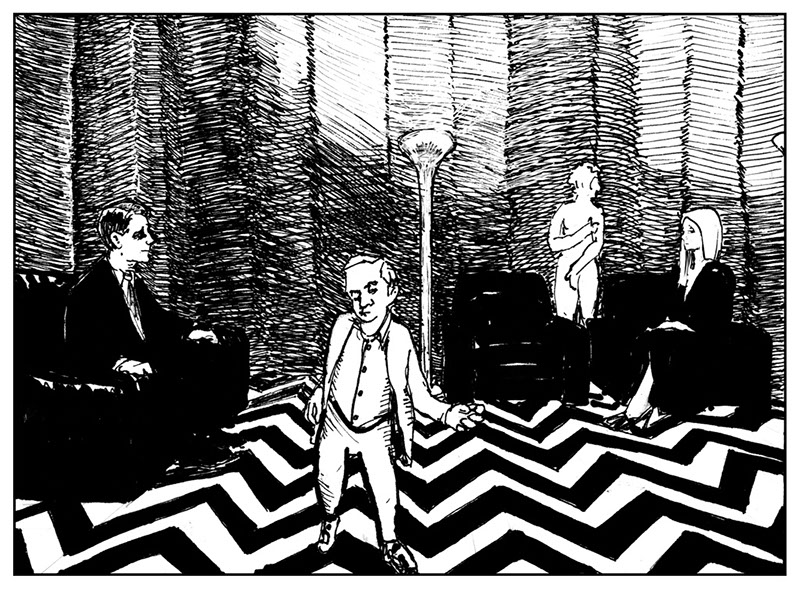 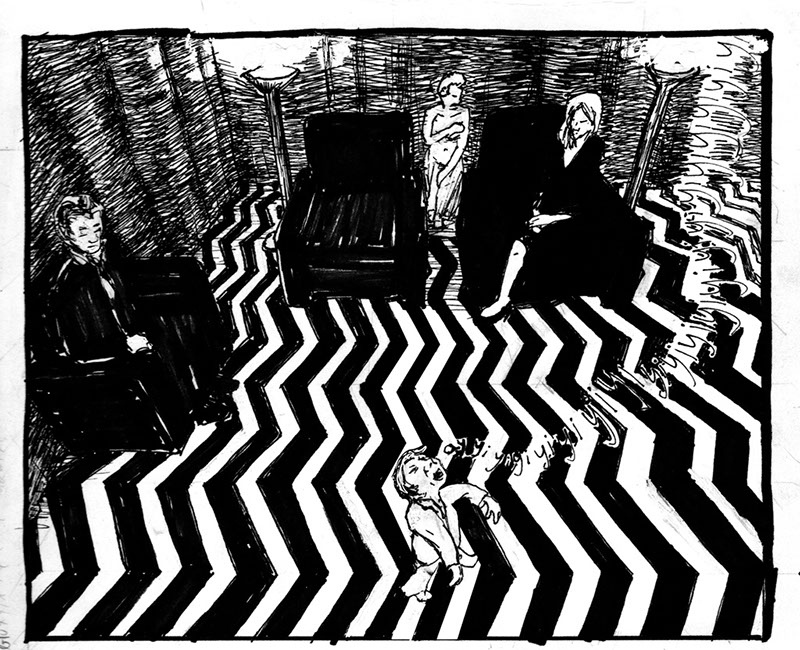 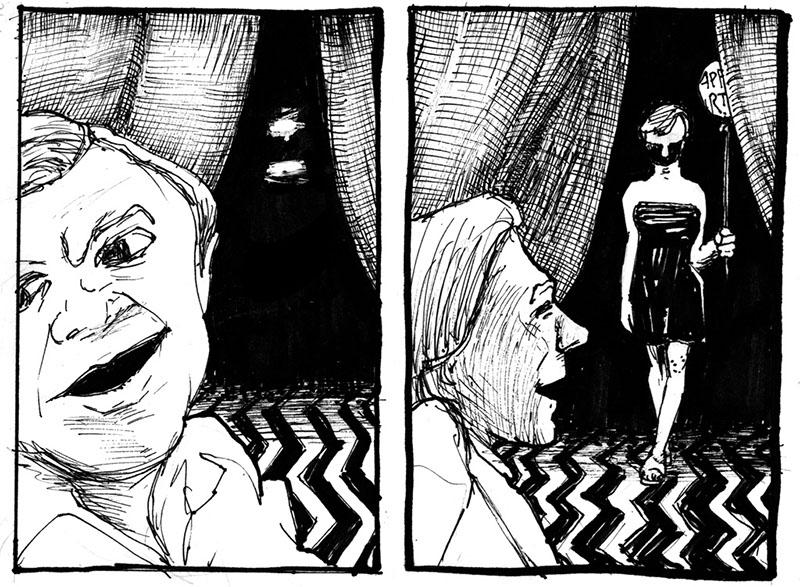 The idea here was to put close caption-style lettering on each page for the dialogue, exactly like the Black Lodge. I was going to use this to tie Miley Cyrus, Twin Peaks, and a Camper van Beethoven album that I really like together. There’s no point in doing that now, but that was the plan. 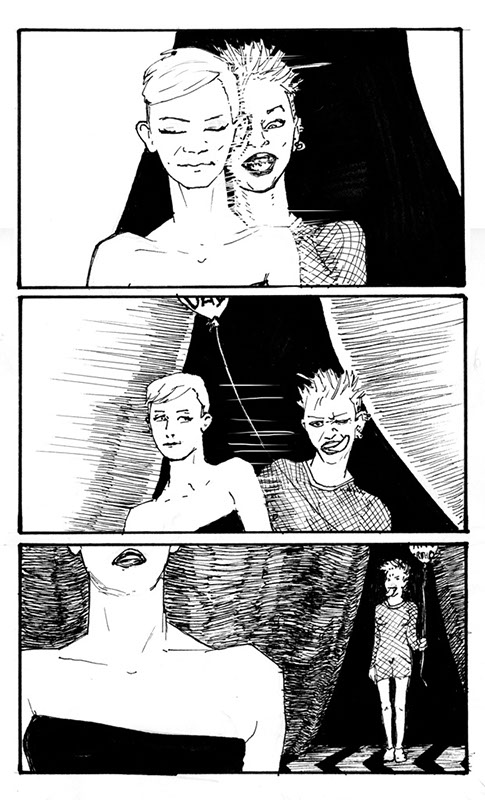 Yes, that’s Miley Cyrus. My theory was that she would replace Laura in the Lodge. This is slightly more plausible when you realize that Billy Ray Cyrus feels that David Lynch is the devil. Literally, in real life, Billy Ray Cyrus actually thinks that. 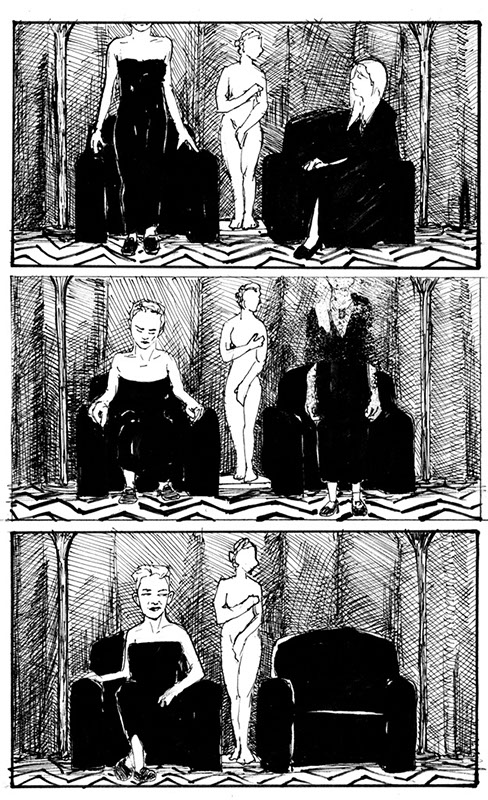 There are issues with her face in the third panel that I would correct if there was any point. 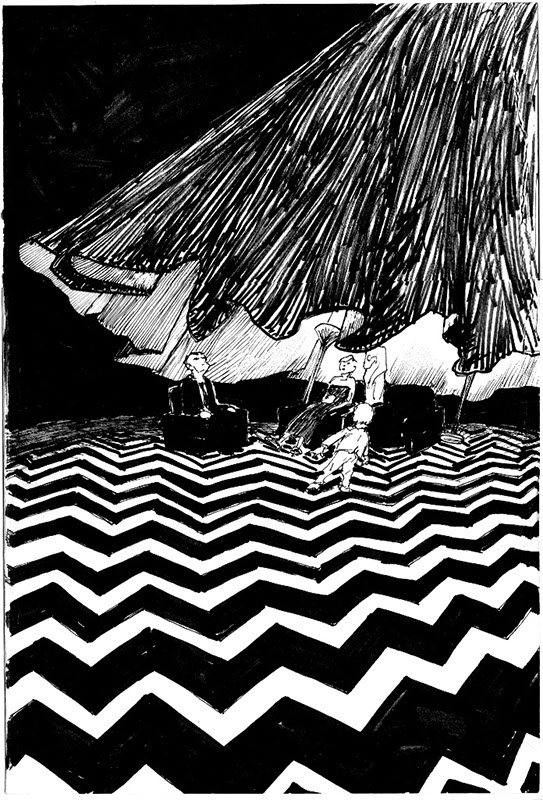 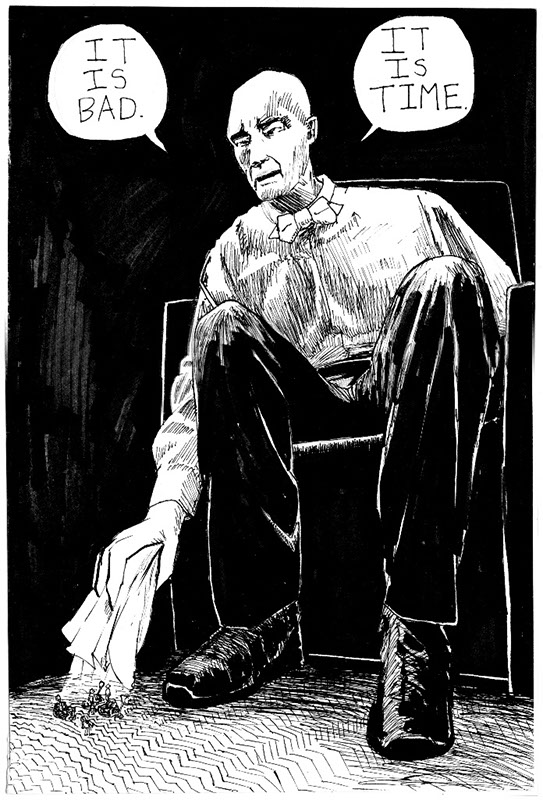 I’m not complaining too much about this comic falling apart, because it was a very good comic for me in many ways. I massively improved my inkwork, my hatching, my pacing, and my ability to draw a likeness. But the coolest thing that came out of it was me getting to meet Carel Struycken at a convention and asking him to pose for a couple reference photographs. It absolutely made my day and if I had finished the comic I intended to dedicate it to him.

Now that I’m not finishing it I guess I’ll just send him the art and say thank you. 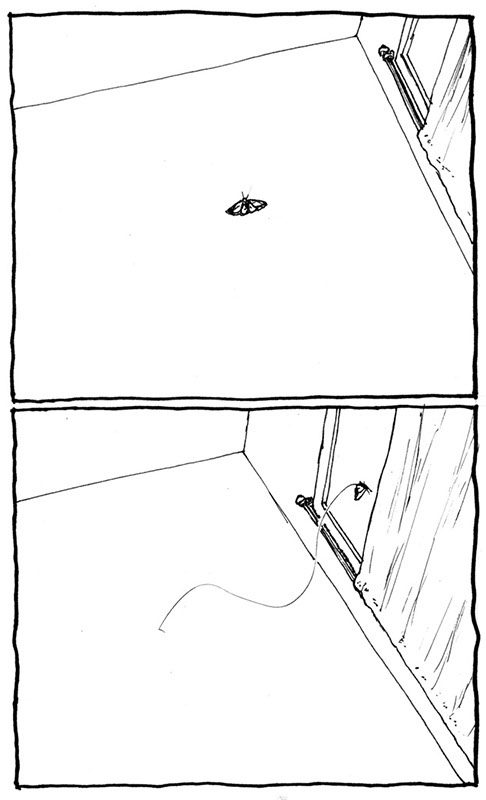 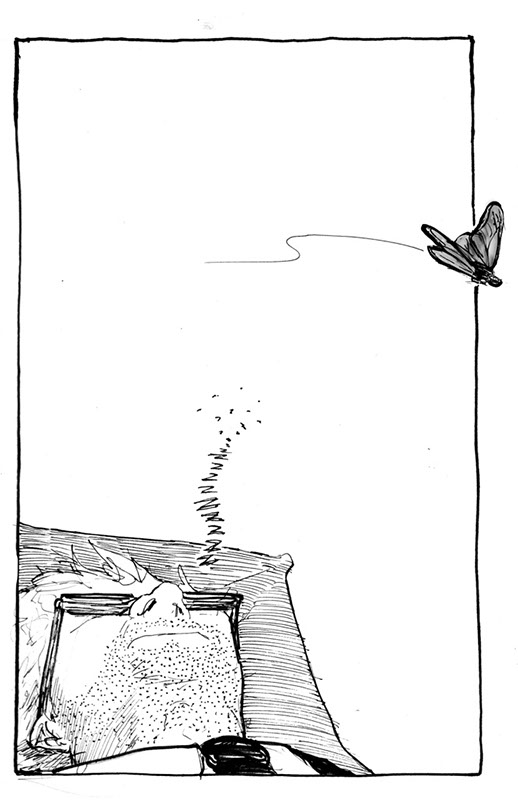 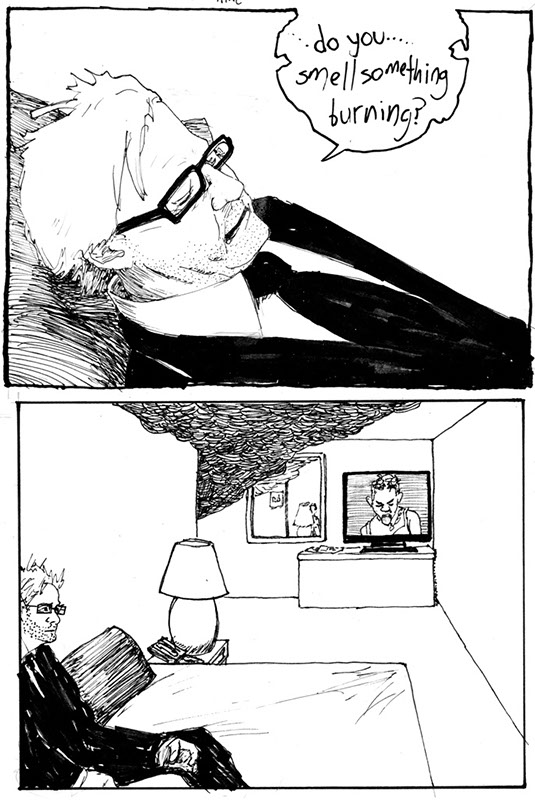 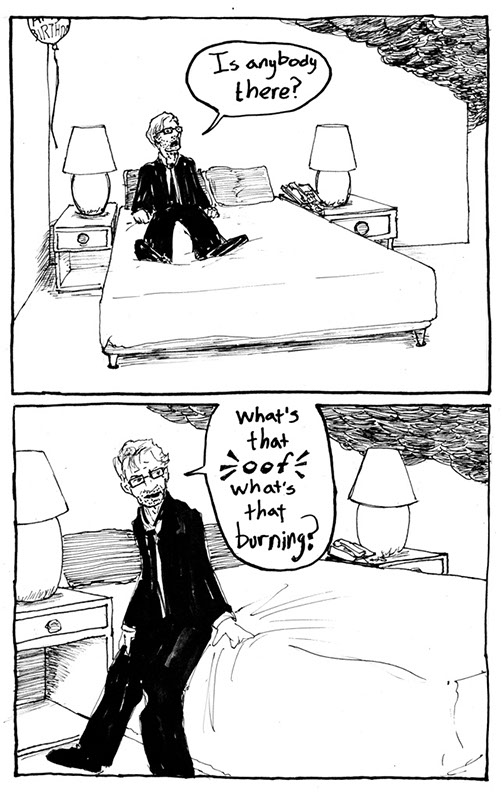 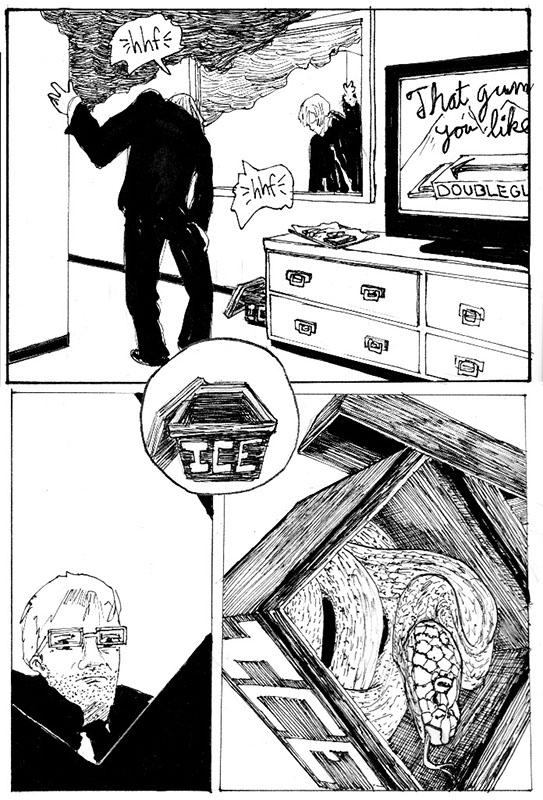 I tried to write this story like David Lynch wrote the original. I used a lot of random things that were happening around me, even when they didn’t exactly make sense. So when I went outside to think about the story, and I ran into a man who had an oiled rattlesnake in a bucket, I knew I had to work it in. It doesn’t exactly make sense.

It would probably work a lot better if I shaded the body and the inside of the bucket more.

If the story were to be completed I would add lettering to the bucket somewhere making it clear that he was at the Portland Arms Hotel.

I learned some tricks about drawing perspective with mirrors and I was looking forward to trying them out. Oh well, next time. 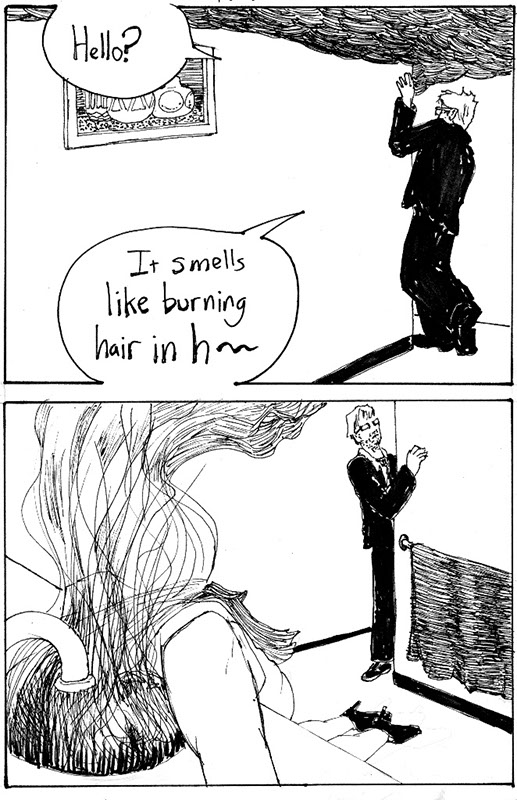 You see that (drawing of a) painting on the wall there? It is not on the wall in any of the other shots. This is another of many things I would have fixed before printing. 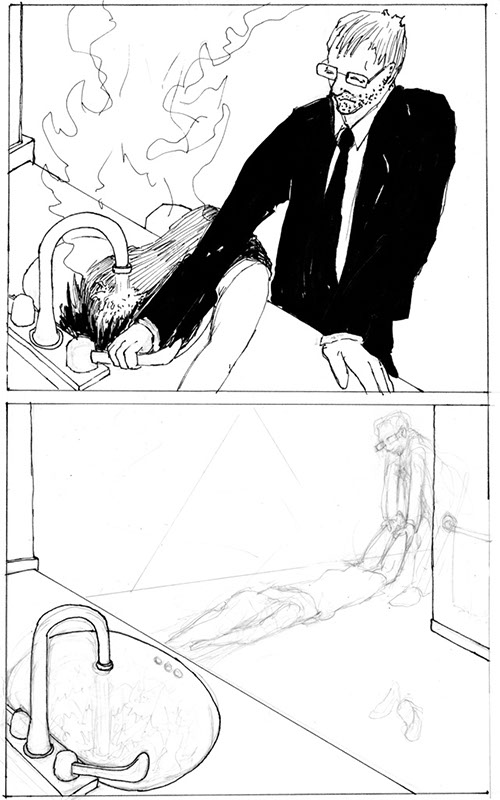 You can really start to see the difference between a finished page and an unfinished page around here. The first panel isn’t quite right yet, and the second panel isn’t even close to done. I was going to do the floor with Photoshop, because you can either spend hours hand-drawing a grid for a tile floor or you can shop it in seconds and it will look better. 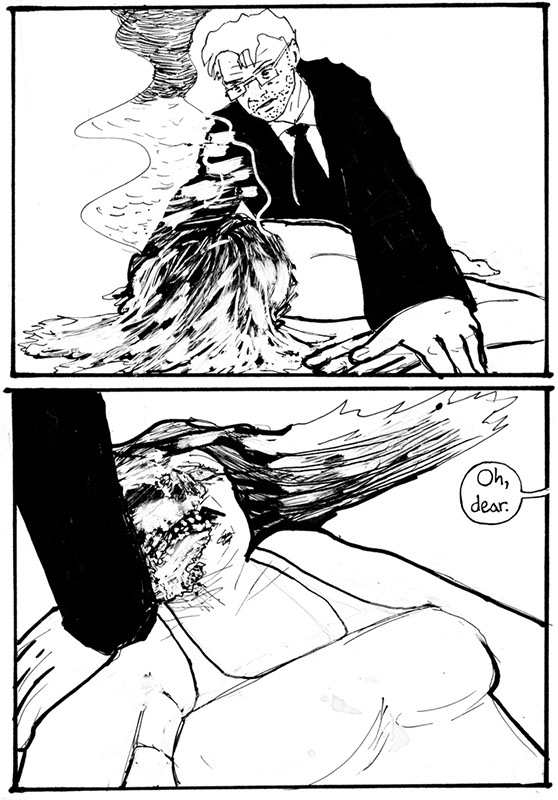 You can see me changing my mind about her dress all over the place around here. I’d also have changed the dialogue to “Oh, my god.” I really like the way that sounds understated and sarcastic without the exclamation point. 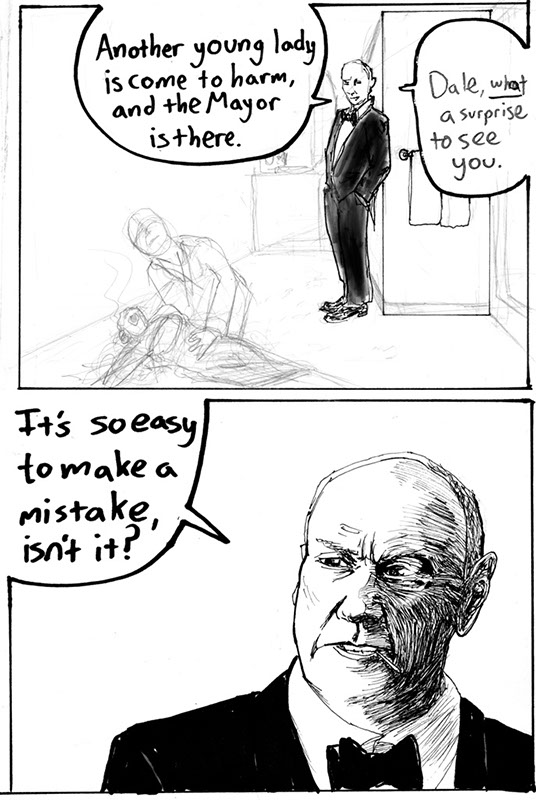 This is the Toothpick Man from X-Files and also Charles Widmore from Lost and also the Vice President from 24. I would have explained this, I swear. 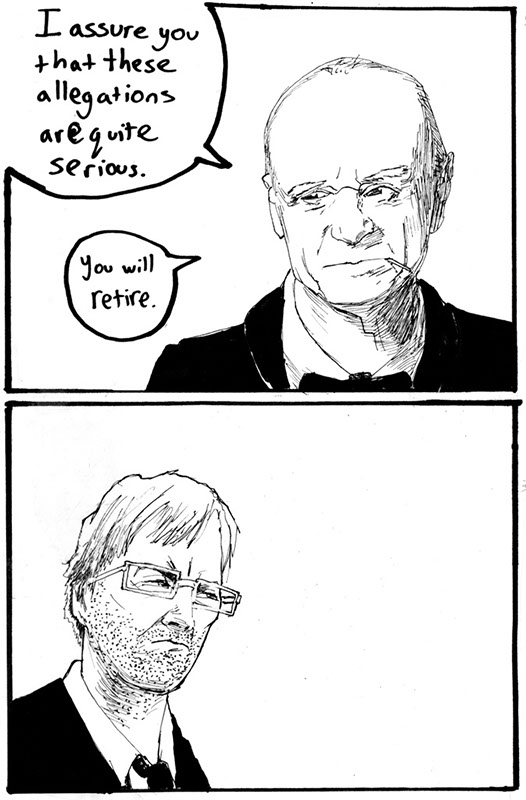 And so the finished work ends. I’m proud of that last panel, but if I were to finish the story I would probably go back and give him dark hair with white highlights. White-haired Coop just isn’t doing it for me.

The entire story, as written (and laid out, lettered, and mostly pencilled…), has Coop getting in a fight with Widmore, eventually defeating him with extreme true-heartedness, returning to Twin Peaks, arguing with Sheriff Andy, and reuniting with Audrey. Audrey had lost her arms and legs in the bank explosion at the end of Twin Peaks, just like in Boxing Helena. This was the entire point of my entire comic, and I can be reasonably quite certain that David Lynch is not going to use that particular odd plot. This is the main reason that I’m letting the project go. There’s no way that Lynch isn’t going to tell what happened to Coop, he’s probably going to tell what happened to Audrey, and it is not going to agree in any way with my fan take.

I don’t have a clue what Lynch is planning, but considering that I use two of the biggest cliffhangers in the last episode, and the whole thing is based around the “25 years later” thing, which he is apparently using too (since the 25 year anniversary is in two months), it’s hard to imagine my work not being overwritten by his.

Then I won’t be able to sell it, because instead of picking up a 25-year-old meme I’m peddling the Go-Bots version of a current work. Instead of people who have been made desperate by time buying my comic because it’s better than nothing, I’m confusing the shit out of people with self-evidently fraudulent canon.

No, this is not good. I’m letting it go and working on other things.

I hope you enjoyed what I did and you’re intrigued by what I planned to do. I’m moving on to projects that I own and do not have to worry about getting sued over, and let’s all look forward to whatever it is that Lynch has planned.

All the best to David Lynch, and I truly look forward to seeing what he has planned.