There is no word in English for how much I love the backgrounds of Keith Giffen’s old Legion of Super Heroes comics. 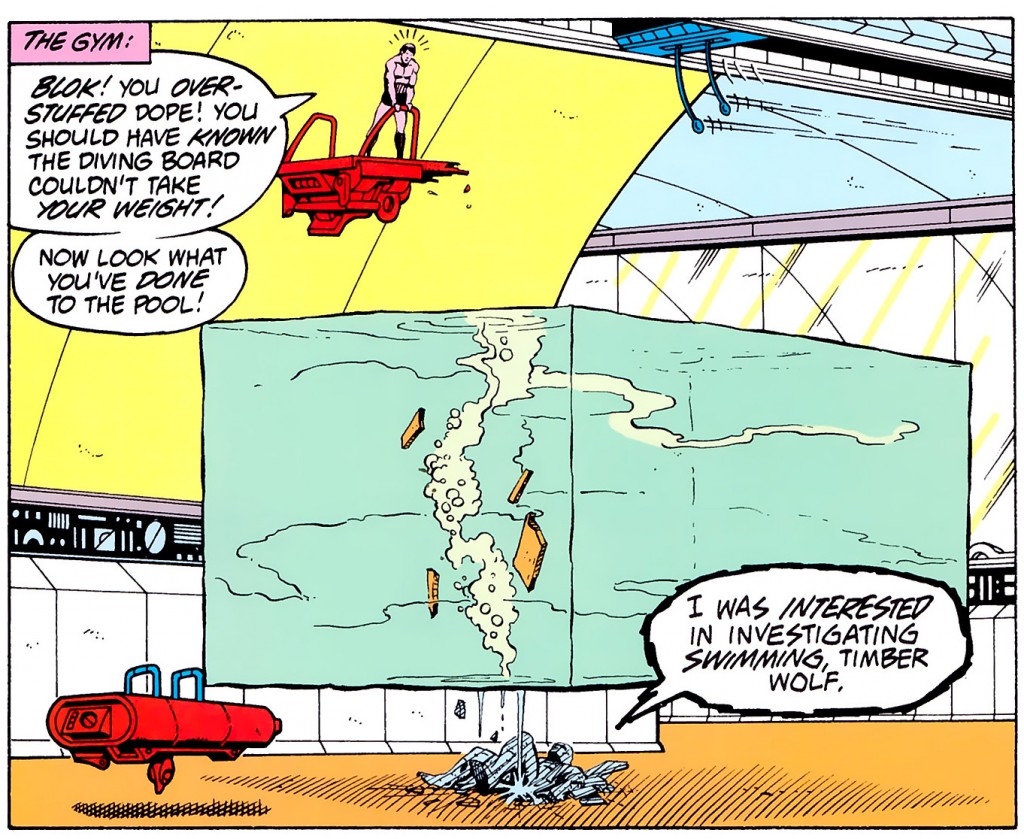 This is one of the funnier panels in the whole series. Take that as you will, but notice the Ambush Bug antennae sticking upside down out of the robot traveling across the roof.

Also note the clumsy shading. It does not appear that shading was ever Giffen’s forte.

I’m mostly doing this article for my own edification, because I’m trying to draw some future-lookin’ stuff right now and it’s Giffen’s styles that I’d like to bite. Frex: 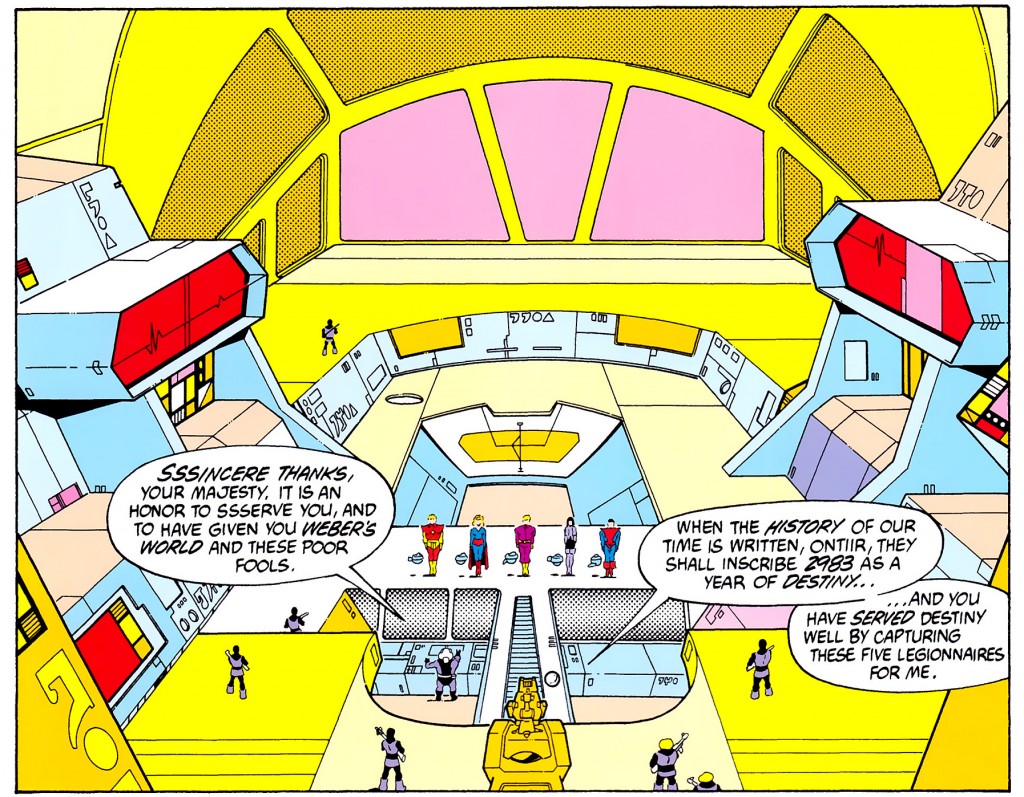 Look at this glorious space-future argle bargle nonsense. This page in is a kind of perspective that I consider to be cheating; one point with flat horizontals and verticals. I’m not saying that nothing looks like that, but it certainly gives the impression that you’re very far away from the subject. The only time in real life that you ever see something without lens distortion, and that includes the lenses in your eyeballs, is when it’s very far away and near the center of your field of view. Fortunately that is what we are looking at here, so it works. But it doesn’t work for nearly anything else.

Note clumsy use of ziptone in the distance, flattening the obviously curved forms of the intergalactic-space-window. The desaturated purple in the distance draws the eye quite nicely to the bright purple Braniac 5 in the center.

I love the goofy little cartoons of the five imprisoned Legionnaires at the center. They shouldn’t all be the same height, but whatever. I also love this dreadful dialogue.

The dialogue on the next panel’s a bit of a giggle as well, especially if you’re not used to the goofy names of Legionnaires. “Brainy” is short for Braniac 5, who is a green guy in a purple jumpsuit who is a superscientist and Legionnaire and occasional boyfriend of Supergirl. Dream Girl and Mon-El are two other characters of equivalently baroque origin. 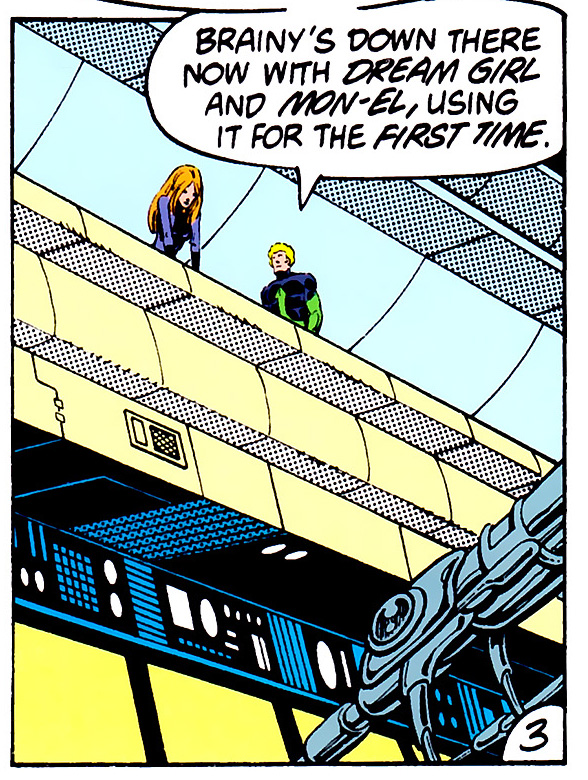 The future is intricate and involved, complicated and complex, for a couple of reasons. One is that it is the artist’s job. A future made of large white rooms and flat tablet screens, though accurate, is not too interesting to look at. He’s got to make it interesting somehow. So we have a lot of stuff that doesn’t make exact sense — three different types of ventilator ducts and a series of radar screens? No in-universe explanation for these details can exist, it’s just there to look Future and create space.

I believe Scott McCloud was working in DC’s bullpen when this comic came out, and I wouldn’t be surprised to hear that he was part of the team that worked on this. Giffen and McCloud have the same careful approach to background, where expressionistic lines that tell stories about emotion are planed out and expanded with a ruler and french curve until they become plausible buildings. What’s up with the techno-organic bridge across the bottom of the frame?

What the architecture of this panel says is, “It’s complicated.” The world reflects the emotional states of these characters. Woe to any 3d modeler who tries to build these sets, because they are not the same from panel to panel.

Nor should they be.

So simple, so good. With a few vertical and horizontals of varying weight he creates quite a bit of space. You can tell it’s the future because it has rockets all over it. The little mushrooms clustered around the base are probably nothing like what actual buildings of the future will look like, but they do give the impression of organic growth and great depth of scale.

I honestly don’t know how they got that gradient, this is not computer colored. Probably ziptone.

Giffen was just learning about the deeper secrets of perspective when he was doing this comic, and I’m convinced he drew this page so that he could learn about concentric circles in space.

And now, a harbinger of days to come. 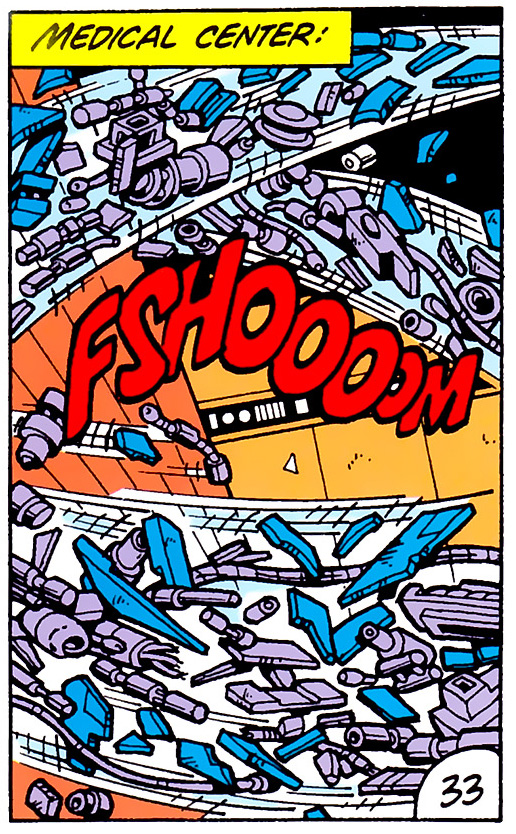 Giffen just uses all his shapes at once. Here you go, his entire shapes vocabulary, an entire bag of tricks poured out at once. It’s one of the delights of this art that every single piece of debris is neatly delineated. No short cuts, no shading. That’s professional art, kids.